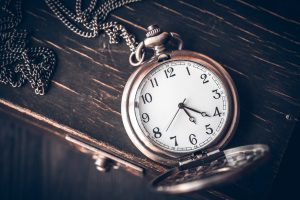 Before wristwatches became ubiquitous in our society, pocket watches were the standard for personal timekeeping. The first pocket watch is thought to have been made in Germany towards the end of the fifteenth century. Bearing a close resemblance to the traditional clock, early pocket watches operated in very much the same manner as their clock cousins.

Like today’s wristwatches, pocket watches consist of two main components, the inner works and a metal case. Many different metals were used for early pocket watch cases including gold and silver. The case was usually of a two piece clamshell design. The cases of early watches were impervious to dirt and moisture, which meant the watches, needed a good bit regular cleaning. As time went on, other less expensive metals were used for case works including mild steel and pot metal.

The inner workings of the early pocket watch contained a number of gears and wheels held in place between two metal plates. The lower plate or pillar plate rests next to the dial while the upper plate might have come in two pieces though the best made watches utilized a single piece upper plate. The plates were precisely drilled and bored to hold the other components in the proper place. To prevent wear of the moving parts, hard gemstones were used with the moving pegs or axles. There were four wheels in the works known as the barrel wheel, the first wheel, the second wheel and the third wheel. The barrel wheel is used as the attachment for the mainspring.

The motion is made by the uncoiling of the spring and is regulated by the escapement that is kept moving by the combined action of the mainspring and the hairspring providing an oscillating movement. The wheel that has sixty gear teeth around the circumference engages the escapement wheel and transmits motion to the minute hand. It also meshes into the pinion of the center wheel that transmits motion to the hour hand. Movement is controlled by a lever that is connected to the hairspring. By moving the lever to the left or the right, the tension of the hairspring is increased or reduced.

The plates of the works were made from plate stock of steel or brass and would go through a series of machining operations that would include being placed on a pantograph machine which would exactly copy dimensions from a master part to the part being machined. After machining, the plates would be polished using several types of abrasive materials like emery. Gemstones like garnet, rubies, sapphires and diamond. Garnets would be cut with diamond points into tiny disks and would then be set in tiny plates of gold hence marks The beginning of mass production watches.

The process of assembly of the works is intricate using precisely made screws and other components that would often be plated or heat treated by hand. The small gears were stamped from brass using very precisely made dies and springs were formed from fine spring wire.

Dial faces were similarly stamped out of a base metal, enameled and the markings stenciled in place and the dial would be fired again. Once fully assembled, the finished watch was subjected to cold temperatures of around forty degrees Fahrenheit and then exposed to higher temperatures up to around one hundred degrees Fahrenheit. This process was undoubtedly used to test the watch in different temperature extremes to ensure consistent operation.

Like countless other consumer products, the way in which modern wrist watches are manufactured has undergone incredible changes since the Industrial Revolution that broke during the turn of twentieth century. This important period in world history ushered in entirely new ways to mass produce products for a growing world population. In every facet of manufacturing there were incredible technological advances that improved efficiencies and helped reduce production costs.

Most of us have heard about the way Henry Ford changed the way automobiles were built by developing the production line assembly method. Cars would constantly roll off the Ford assembly line, as workers would fit various parts to the chassis in a precise order and within a predetermined time. What few of us think about are the other changes that made this type manufacturing operation possible. Critical to the success of the mass production line was the development of standardized parts, components that are nearly identical to each other.

Prior to the development of mass production assembly lines, most mechanical assemblies, including watches were built from components that were made individually most often by different producers. This meant that very often, parts from one machine be it a car, locomotive or sewing machine, could be not be used on another machine.

As other watch producers adopted the practice of parts standardization and integrated quality control, the reliability of wrist watches was greatly increased. The use of standardized components meant that those parts that subject to wear did so in more consistent and predictable way, requiring far less maintenance and repair than those timepieces assembled as one of kind items.

Thanks to the nerve pain treatment experts for sponsoring this post!