Brief History of the Watch 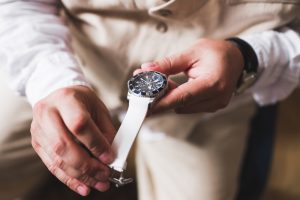 If we look the brief history of the watch, it can go back as far as 1500 B.C. One may say timekeeping is one of the oldest human inventions. They would even consider timekeeping to be one of our most precious possessions.

The oldest existing sun-dial can be found in Egypt, but the first timepiece that was transportable was actually produced in Italy. The main problem of the portable timekeeping device was the lack of power necessary to keep it running. They had timepieces that used weights in order to function but this method defeated purpose of being portable. Around 1675 B.C., the development of the balance spring changed timekeeping by taking its accuracy to another level: the second hand was added to the watch. Looking at its history, you can see that all cultures had a hand in the development of the timepiece we know today. We can see that there are many types of styles as well as various methods used to power each.

The history of the Egyptians tells us that they were the first to use a pole or column type device to tell roughly the time of the day. This was the first use of the sundial. This device was used only ten hours in a day due to the nature of the sun and it was ultimately not accurate as it could only tell the time when there was sunlight. The Egyptians were also believed to be one of the first to design the water clock, yet the Chinese took this idea and improved its design.

In China around 200 B.C., the Chinese took the developments of the Egyptian water clock and enhanced the precision of its initial design and capabilities. Due to weather conditions, the water tower would not work properly in the cold. This tower stood around 33 feet tall or ten meters in height.

Hourglasses were also believed to be designed primarily by the Ancient Egyptians. It has a very simple design, but some people still use it today for cooking or to measure time in recreational activities such as Scrabble and Cranium. The design of an hourglass requires one to take a cylindrical piece of glass and to taper it in the center. Then, one should place a specific amount of sand in the glass, close off the top and the bottom, and then simply flip the new contraption. This will start the hourglass’ function of timing the events that one wishes to measure.

If we look at the time, early mechanical clocks with escapements were developed by a mathematician in China in 8th century B.C. Yet, the earliest mechanical clock makers were Christian monks. These were used for religious purposes, as religious ceremonies and daily prayer needed to be regulated by time. The necessity of timekeeping for religious purposes greatly affected the demand for technological improvements in timepieces. Mechanical timepieces of the past revolutionize the watches that we wear today.

From the timepieces of the past, we have evolved to produce self-winding time pieces that run strictly on the crown of the watch being spun. Once that method became popular, a new mechanism was designed that included a rotating rotor that brings tension to springs as one moves their arms which then enables the watch to function.

As we see today, Citizen is one of the producers that use solar panels in watches, which limit battery usage in timepieces. Another company, Seiko, has kinetic movement which is similar in design to the automatic which has the rotor that generates energy into rechargeable batteries.

Atomic clocks, which were invented in 1949, are the most accurate timekeeping mechanisms in the world. It is said to be within the 30 billionths of a second in accuracy. The first was displayed in the Smithsonian Institution in Washington D.C. As we can see, the methods used to tell time have changed as new improvements in technology are made.

Sandy Plumber is the absolute best Plumber Sandy Utah has.  If you have anything from a leaky faucet to issues with your water heater give them a call!